The Authorities of Darkness

As a long-time anti-war activist, I no longer believe that the traditional means of resistance, such as mass protests, demonstrations, or even creative resistance such as practiced by the Yes Men (http://theyesmen.org/), entertaining as it might be, can make a significant impact on the powers that rule this world. Instead, I have come to understand that "... our part is not to fight against powers of flesh and blood, but against spirit-beings, mighty in the stream of time, against spirit-beings, powerful in the moulding of earth's substance, against the cosmic powers, whose darkness rules the present time, against beings who, in the spiritual worlds, are themselves the powers of evil." Ephesians 6:12 (New Testament: A Rendering by Jon Madsen. Edinburgh, Scotland: Floris Books, 1994).

The roots of the evil behind the Iraq War, the war against the Syrian people, and the ecological devastation of the earth lie not in "capitalism" or the "clash of civilizations" or other certified tropes in the vast network of superficial depth, but in the war currently raging in heaven. The purpose of this blog is to use spiritual scientific instruments to probe the nature of this war. We seek remedies in the healing of the spirit rather than in protest movements that merely reflect our inner devastation.


Rudolf Steiner identified the entry point of a sound diagnosis as follows, "To start with, it must become clear to us that everything that happens externally on the physical plane is dependent on the underlying spiritual forces and powers … I have often pointed out here that there are, in a certain way, lines of connection, via the most varied intermediate links, between the external world and the secret brotherhoods, and onwards from the secret brotherhoods to the spiritual world" (Rudolf Steiner. "The Karma of Untruthfulness", Volume 1, Lecture 1, Dec. 4, 1916).

The secret brotherhood is what I will refer to in this blog as the "authorities of darkness" following Paul's characterization of the spiritual domination system. As Heinz Pfeifer described them, "Who are, then, the 'Brothers of the Shadows'? Once could perhaps imagine them as something akin to high priests of the powers of darkness, as people with occult capacities who stand in connection with anti-Christian super-earthly powers, retarded and retarding beings. These beings are Angels that are called 'evil' by us human beings, and work counter to the rightful course of the evolution of mankind. In the wider cosmic context they, too, have their justification and their working as so-called forces of opposition acquires a deeper meaning. Nevertheless, we human beings are faced again and again with the decision, in whose spirit we think, feel, and act." (Heinz Pfeifer. The Brotherhood of the Shadows. Basel: Lochmann-Verlag, 2011, p. 24).

At this point, readers may accuse me of reverting to a pre-Enlightenment concept of evil. But I would counter by saying that the universe I have recently discovered is no slag heap of matter whose rare epiphenomena are conscious beings. The cosmos envisioned by spiritual science is constituted throughout by personal beings arrayed in a harmonious hierarchy, as described by Dionysius the Areopagite, "In my opinion a hierarchy is a sacred order, a state of understanding and an activity approximating as closely as possible to the divine. And it is uplifted to the imitation of God in proportion to the enlightenments divinely given to it. The beauty of God - so simple, so good, so much the source of perfection - is completely uncontaminated by dissimilarity. It reaches out to grant every being, according to merit, a share of light and then through a divine sacrament, in harmony and in peace, it bestows on each of those being perfected its own form." (Pseudo-Dionysius: The Complete Works. New York: Paulist Press, 1987. p. 154). Such is the cosmic order whose subversion by the authorities of darkness we will explore through the historical symptomatology of Rudolf Steiner. Along the way, we will rediscover the true roots of social justice and effective means of spiritual resistance to those whose darkness rules this present time.
Posted by Boyd Collins at 5:48 PM 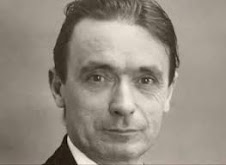